A tourist in New York City with photo camera. People on Central Park 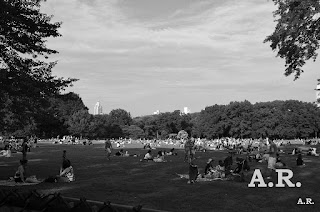 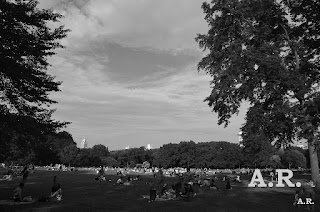 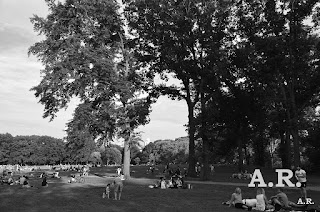 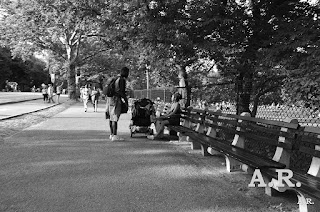 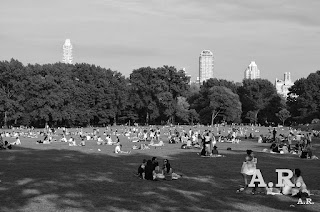 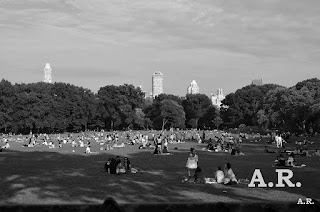 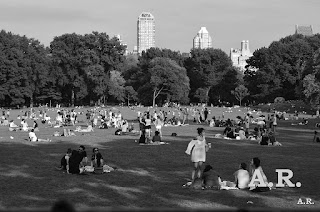 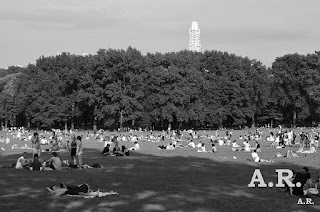 Central Park is home to seven bodies of water, all artificial. The main lake is the Jacqueline Kennedy Onassis Reservoir, so named since 1994. Its construction lasted from 1858 to 1862. Covering an area of 42.9 hectares (106 acres) between 86th and 96th Streets, the reservoir reaches a depth of more than 40 feet (12 m) in places and contains about 1 billion US gallons (3.8 billion litres) of water.The Reservoir is best known to New Yorkers for the jogging track around it. The Reservoir is by far the largest lake in Central Park, surpassing the other three artificial lakes.
The Ramble and Lake south of the Great Lawn covers nearly 7.3 hectares (18 acres). Built on a former swamp, it was designed by Olmsted and Vaux to accommodate boats in the summer and ice skaters in winter. The Lake was opened to skaters in December 1858, while the rest of the park was still under construction. At the northern end of the park, at 110th Street, the Harlem Meer, named in honor of one of the first communities in the region, covers nearly 4.5 hectares (11 acres). A wooded area surrounded by oak, cypress, and beech trees, it was built after the completion of the southern portion of the park. Harlem Meer also allows visitors to fish, provided that they release the fish later. In the southeast corner is the Pond, with an area of 1.4 hectares (3.5 acres). The Pond is located near one of the busiest entrances to Central Park and is under sea level, which helps mitigate the different sounds of the city, and create a startling atmosphere of calm in the heart of New York.
R201506
Recuerde que haciendo click en la foto se ve a mayor tamaño
Etiquetas: A tourist in New York City