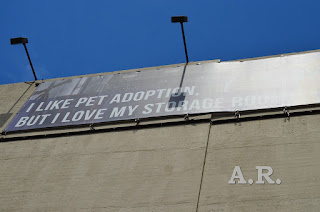 Self storage (a shorthand for "self-service storage", and also known as "mini storage") is an industry in which storage space (such as rooms, lockers, containers, and/or outdoor space), also known as "storage units" is rented to tenants, usually on a short-term basis (often month-to-month). Self-storage tenants include businesses and individuals.
The self-storage industry is primarily a United States-based industry: of the 58,000 storage facilities worldwide in 2009, 46,000 were located in the United States

The High Line is an elevated freight rail line transformed into a public park on Manhattan’s West Side. It is owned by the City of New York, and maintained and operated by Friends of the High Line. Founded in 1999 by community residents, Friends of the High Line fought for the High Line’s preservation and transformation at a time when the historic structure was under the threat of demolition. It is now the non-profit conservancy working with the New York City Department of Parks & Recreation to make sure the High Line is maintained as an extraordinary public space for all visitors to enjoy. In addition to overseeing maintenance, operations, and public programming for the park, Friends of the High Line works to raise the essential private funds to support more than 90 percent of the park’s annual operating budget, and to advocate for the transformation of the High Line at the rail yards, the third and final section of the historic structure, which runs between West 30th and West 34th Streets.
R201506
Recuerde que haciendo click en la foto se ve a mayor tamaño
Etiquetas: A tourist in New York City Architecture