Wikipedia
Captain Archibald Haddock (French: Capitaine Haddock) is a fictional character and a major protagonist in The Adventures of Tintin, the comics series by Belgian cartoonist Hergé. He is Tintin's best friend, a seafaring Merchant Marine Captain.
Haddock is initially depicted as a weak and alcoholic character under the control of his treacherous first mate Allan, who keeps him drunk and runs his freighter. He regains his command and his dignity, even rising to president of the Society of Sober Sailors (The Shooting Star), but never gives up his love for rum and whisky, especially Loch Lomond. In the adventure Secret of the Unicorn (and continuing in Red Rackham's Treasure) he and Tintin travel to find a pirate's treasure captured by his ancestor, 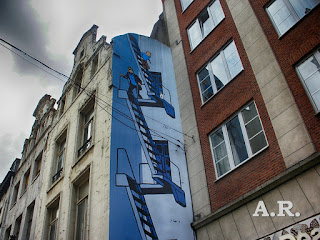