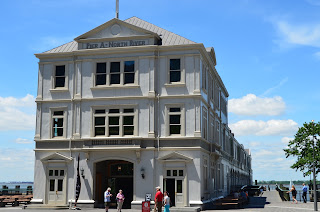 Wikipedia
City Pier A is a municipal pier in the Hudson River at Battery Park near the southern end of Manhattan in New York City. It has also been named Liberty Gateway. It is the last surviving historic pier in the city.

Pier A was built from 1884 to 1886 to serve the New York City Department of Docks and Harbor Police. The engineer in charge of construction and design was George Sears Greene Jr. (1837-1922), the son of the civil engineer and Union general George S. Greene (1801-1899). The design mirrored the Statue of Liberty which could be viewed from a similar but shorter tower. The roof was tin, painted green to resemble copper. In renovation by the Battery Park City Authority this roof was discarded, and replaced with copper.