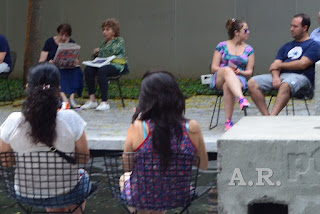 El jardín de esculturas del MOMA es un lugar especial, excelente, para descansar, hablar, ver arte.
Moma History
Upon his appointment as the first director, Barr submitted a plan for the conception and organization of the Museum that would result in the Museum's multi-departmental structure, with departments devoted for the first time to Architecture and Design, Film and Video, and Photography, in addition to Painting and Sculpture, Drawings, and Prints and Illustrated Books. Subsequent expansions took place during the 1950s and 1960s, planned by the architect Philip Johnson, who also designed The Abby Aldrich Rockefeller Garden. In 1984, a major renovation designed by Cesar Pelli doubled the Museum's gallery space and enhanced visitor facilities. 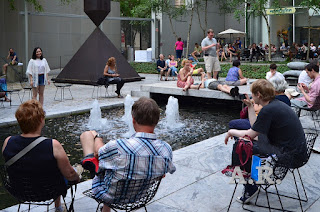 
............ The new installation in the Abby Aldrich Rockefeller Sculpture Garden is The Modern Monument, which brings together diverse works organized around the theme of the modern monument. Included are Barnett Newman’s Broken Obelisk (1967), which does not commemorate a specific event but, rather, serves as a symbolic monument for all people; and Pablo Picasso’s Monument (1972), a memorial for the French poet Guillaume Apollinaire, who died of influenza at the end of World War I. These two works are joined by German artist Katharina Fritsch’s Figurengruppe/Group of Figures (2006–08), which comprises nine boldly colored, life-size figures, among them St. Michael, a Madonna, a giant, and a snake. Favorites like Picasso’s She-Goat (1950) and Joan Miró’s Moonbird (1966) are shown alongside works by Alberto Giacometti, Henri Matisse, Mark di Suvero, Tony Smith, and others.......