A tourist in New York City with photo camera.#architecture Tops, skyscraper, from One World Observatory 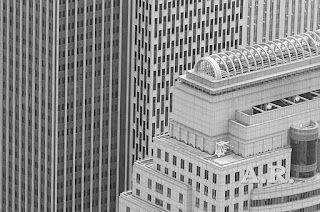 New York City view from the One World Observatory presents as collecting views on this photo, the top of a skyscraper, in turn, is small or dwarfed beside the adjacent high-rise skyscrapers.